As a guest panelist NPSA Chair Richard Vincent details the comprehensive decade of member company investment in health infrastructure and sets out the avoidable threats to supply chain and pharmacy efficiency on a range of fronts including: 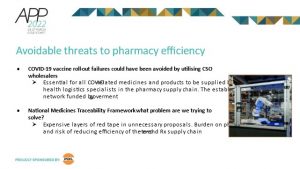 First and foremost, I just want to talk about the investments that we’ve made as wholesalers into the industry. As you can see from the slide, over the last 10 years we’ve made investments of more than 750 million, and a lot of that has actually happened in the last couple of years on the back of having some certainty, and I guess a runway around the 7th CPA, and that, from our perspective, been important to continue to invest ..because to be viable as a wholesaler, where you’re only earning one or two cents in the dollar, you need to continue to invest and look for efficiencies.

And I think all of the systems that we’ve built, and if you add up the collective service of the three major wholesalers, it’s 396 years that we’ve been servicing community pharmacy, and all of the systems that we’ve built have been on display in the last couple of years, and I think community pharmacy’s done a great job of showing how robust it is and how it can deal with anything that’s thrown at it. I’d like to think that the wholesalers are seen as a part of that process as well.

The investments we’re making are typically around new distribution centres, but they’re also around smarts, things that will help us do business better in the future: how we manage inventory, real life data or dynamic data that allow us to make decisions, and I think that’s very important. And as you can see from the slide, we’re delivering about two million medicines every day into community pharmacy, and during the pandemic there were times when it was ten times as much as that. So, I think our systems are good, but the key for us is to continue to invest.

So, when it comes to investing and being efficient, there are a couple of things on the radar that really concern the NPSA. One of them is obvious to the group in the room, and that’s the vaccine distributions. We’ve gone through phases in this industry where the wholesalers have been used, or not used, direct distribution, suppliers move away from the wholesale system- the CSO system, and then coming back because whatever that motivation was originally, ultimately efficiency and effectiveness prevails.

But my point here is, do we ever learn the lesson? And we’ve gone through a period of time where in crisis we’ve decided to invent a new system that’s wasteful, that’s inefficient. It’s bloody expensive, by the way, and this is not my number, this is what’s in the budget estimates, $234 million put aside for the distribution of three vaccines, $234 million. The CSO pool is $200 million for all the medicines in Australia. So that gives you some context. And then we build a around it because we know it’s going to have problems, so we need to build a tracking system because we don’t know where all the vaccines are going to end up, whereas if we had used the CSO system in the first place, things would’ve been simpler. Imagine if I asked you to take fortnightly deliveries into your pharmacy of pharmaceuticals.

So, all I would say around the first point is we need to continue to push. Trent’s advocacy through the last 18 months to have this come back through the wholesalers has been very much appreciated, but we still sit here today without that in place. So, if you get an opportunity to talk to anyone in government, please push this for us and we’ll continue the case, because it affects all of us and our efficiency. 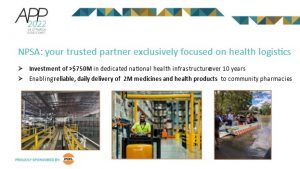 The second item that I’ve got there is around the National Medicines Traceability Framework, which is a fancy name for we come out of COVID and somebody’s had a thought bubble that we need to track and trace medicines in Australia. And the stated goals are to manage out-of-stocks, to manage recalls, and to deal with counterfeit product in Australia.

Well, first of all, we don’t have the same issue with counterfeit product that occurs overseas. We also have about 100 recalls across the CSO distributors every year, and they’re managed seamlessly. So, I don’t know why we need a new system for this.

And then on top of that, over the last two years we couldn’t have demonstrated more how the manufacturers, the generics companies, the TGA, pharmacists and wholesalers have come together to manage out-of-stock. So, I ask the question, what problem are we trying to solve here by putting a track and trace system in place? As wholesalers with 396 years of heritage here, I can tell you it would be an abject failure, as it’s been in Europe. We need to say no to this. There are three different proposals, the light touch proposal, the one that involves the least impact on community pharmacy, is running in Europe, and the pharmacists are throwing it out. It’s impacting their dispensary workflow, and it’s impacting the speed at which they can get prescriptions to patient.

So when this legislation comes around, and when the proposals come around for discussion, say no, please, because you don’t need the red tape, you don’t need the changes to workflow where you need to track every medicine and be scanning medicines in and out. It’s a disaster, and we all need to say no. And on that note, I’ll stop there. Thank you.

Panel Chair Suzanne Greenwood: It occurs to me that we’ve had both Jane and Anna mention the five-year Strategic Agreements that have just been entered into and with having NPSA here, I can’t help but think that there’s got to be some consequences for the CSO wholesalers in that, Richard, whether you wanted to expand on that?

I’m certainly happy to, Suzanne. First and foremost, if we think about the heavy lifting that’s been done through those two Agreements, there’s some fantastic things that have been put in place and great credit to Anna, and also to Jane, for the things that are in place. We now have security around low-value, low-margin medicines that enable us to continue to supply those through our community pharmacy. Big tick.

Then the piece around inventory and recognising that we’re part of an international supply chain where most of the product that lands in a community pharmacy comes from overseas. A lot of it comes from China. It only takes a small change in policy or a political issue and, all of a sudden, we’ve got challenges with inventory coming into Australia.

So the whole concept of holding a lot more stock in Australia is a fantastic thing. It’s future-proofing our business. So there’s some very positive things that have come out of those two agreements, and I really support those.

But then there’s some unintended consequences for the wholesalers. Obviously, there are price cuts that are coming. Before, my theme was really around viability of wholesalers and then having the consistency and confidence, if you like, over a period of time to continue to invest and find efficiencies that enable us to keep surviving into the future.

One of the things that’s happened through these two agreements is that there are price cuts with unintended flow-on consequences to the wholesalers and, of course, we will take that up, as we already are. We’re having those conversations with the department and with the government and we’ll work through those in due course. But it just, again, demonstrates the interdependency of all of the pieces of community pharmacy. You pull a lever over here, and it has a separate impact over there.